E-Crane in Port of Västerås

E-Crane in Port of Västerås 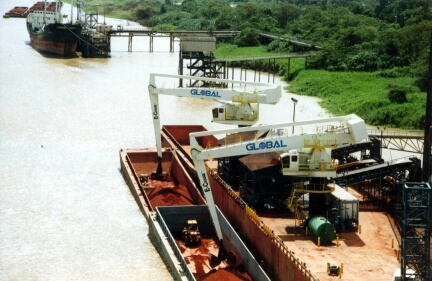 The new E-Crane at the Port of Västerås (see earlier news item) was successfully taken into operation in the middle of August 2003.

Already on the first job, Mälarhamnar used both the 10 m3 MRS clamshell grab as well as the 3 m2loggrapple as the ship carried logs on deck and turf in the hold. Both tools proved to be efficient and well-matched to the crane.

The second ship, carrying coal, arrived only two days later. The coal was unloaded directly into
60 tons dump trucks, the cycle involved a 150° slew angle. After only few hours practice the driver achieved a remarkable rate of 500 tph and higher handling rates will surely be achieved in future.

Only 6 weeks after arrival of the first ship, unloading times have been reduced by 50%. Thanks to the E-Crane, fully laden coal vessels are now discharged in one day – earlier two days were scheduled.