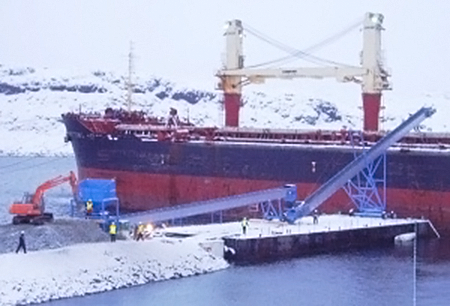 Minelco AB, a subsidiary of state owned LKAB in Sweden, has ordered two shiploaders from UK based B&W Mechanical Handling.

Seqi is located 90 km north of Nuuk, at Fiskefjorden, which is normally accessible throughout the year.

The permanent B&W shiploader, which at peak rate will handle up to 2,000 tph olivine rock, will operate on a pier, now being built by Danish construction company MTHøjgaard.

The 45 m long loader, capable of loading vessels up to 60,000 tdw, is provided with a separate 3-way B&W Samson feeder unit, which will be fed by Caterpillar frontloaders.

Both B&W units are rubbertyred, mobile machines, which can easily be moved along the entire length of the vessels.

Olivine rock will be extracted from a new open pit mine, located approx. 1 km from the harbour area, where it will be crushed and graded. The loader will also be utilized for stockpiling graded olivine rock in the storage area.

The open pit mine will be fully operational in the spring of 2006 and will, at full capacity, produce 2 mio. tpy olivine.

Several other B&W installations operating in Scandinavia, are typically used for handling feedstuffs, biofuel and gypsum.

Since 2003 B&W are part of the German Aumund group. Port-Trade ApS have represented B&W since 2003.